Decorative ceremonial axe presented to the former Mayor of Barking and Dagenham, Jack Thomas and his wife Maisie by the former Mayor of Witten, c.1991. The axe is thought to be a woodcutters axe. Possibly presented by the then Burgermeister of Witten, Klaus Lohmann. Barking and Dagenham and Witten were first linked in 1947 when Dagenham youth leaders Phoebe Kirk and Arthur Durrant invited German prisoners-of-war from the Harold Wood camp to social events at Kingsley Hall. This initial contact inspired Mrs Kirk to instigate regular exchange trips for young people between the borough and Germany. Witten, an industrial town on the river Ruhr was seen as a suitable twin. Witten lies on the outskirts of Dusseldorf as Barking and Dagenham does to London and is surrounded by countryside dominated by forests, hills and woods of the upper Ruhr Valley. The town grew as a coalmining community and although the mines are now defunct. The town suffered badly in WWII, about 80% of the houses were destroyed by bombs. The official twinning document, which saw the launch of the Witten Club, was signed by both towns in 1979, with the intention of expanding the benefits of the twinning to all members of the communities. Witten's Burgermeister (mayor) Klaus Lohmann (1984 – post 1998) stayed with Mrs Kirk in her Dagenham home as a youngster as part of the exchange scheme.

Decorated ceremonial axe made to resemble a wood cutters axe. The axe head is brass and both side have been decorated to show a woodland scene. In the centre of the decoration is a cut-out section showing two crossed axes within a shield. This is surrounded by a foliate frame, standing either side of which are two woodsmen in tradition costume. Interspersed among this are trailing branches and leaves. The decoration is highlighted by a black enamel background. The axe is joined to the handle by a brass head which is decorated with scrolled leaves and black enamel. Below this is a thin, black leather band The wooden handle is slightly curved in the middle. The axe has a brass foot also decorated with scrolled leaves and black enamel, above which is another black, leather band. 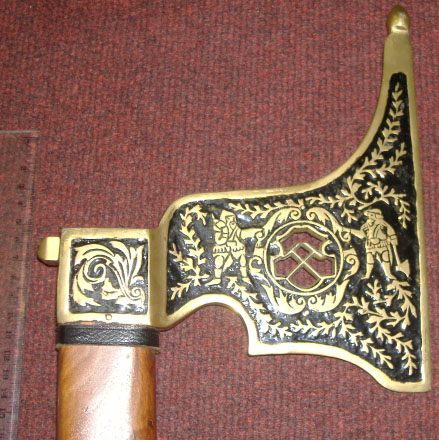 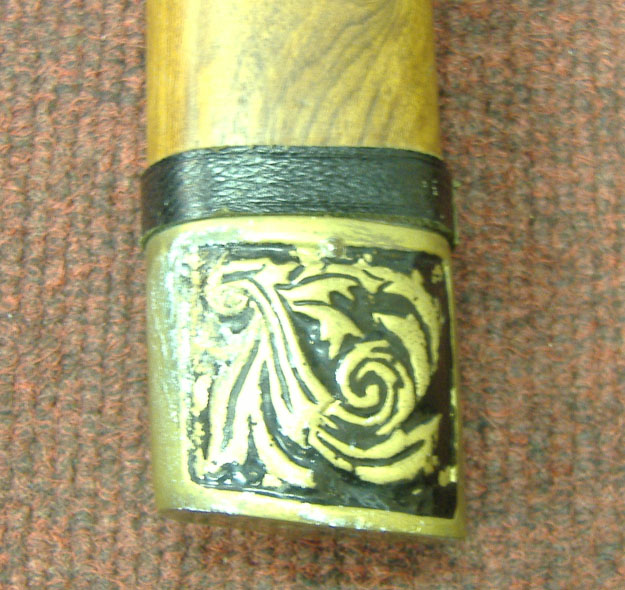