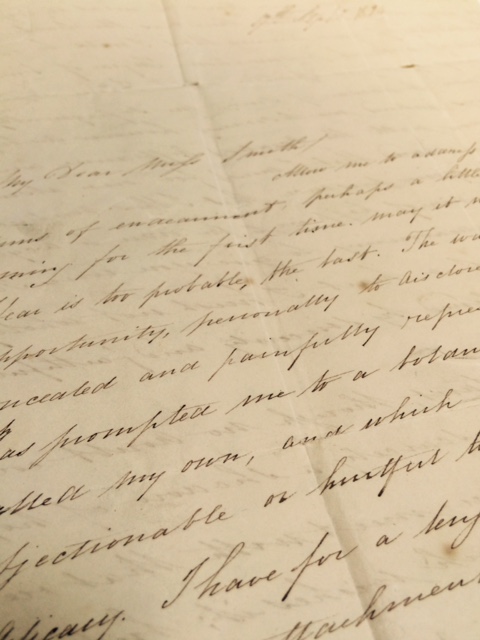 Regardless of what you think of Valentine’s Day, there is no denying that in the era of tinder and snapchat, the modern suitor is only ever a ‘winky face’ or a ‘swipe right’ away from declaring his or her amorous intentions. Things were remarkably more difficult for ladies and gentlemen courting in the early nineteen century, as show by a letter written by Thomas Stone to a Miss C. Smith on 17 September 1824, now kept at Valence House. The letter, which is worthy of a Jane Austen novel, was apparently found tucked away in the wall of an old house on Queen’s Road, behind Roden Lodge. See a full transcription of the letter below.

Unfortunately we do not know who Thomas Stone was, nor have we been able to establish the identity of Miss Smith for whom he had ‘long concealed and painfully repressed feelings’. There is no one of the name Stone listed as living in Barking in the 1851 Census, apart from a Sarah Stone, who was visiting from Stratford. We also cannot trace anyone of the right age called Miss C. Smith.

Thomas Stone is quite reticent in the letter, and expresses his fear that he will lose the good opinion of the woman he is intending to court, or even worse that she may laugh at his advances. He declares that he has ‘scarcely a shadow of hope’ that she will return his ‘warm attachment’, and hints at her ‘very distant, though no doubt correct conduct’. Regrettably we will never know whether her distant behaviour was intended to discourage him as she did not return his ‘sentiments of the heart’, or whether it was due to the confines of early nineteenth century society.

The fact that the letter exists to be read almost two hundred years after it was written suggests to me that he lost his nerve and never actually sent it to Miss Smith. Instead it was hidden away and later forgotten about. Indeed the seal has not been broken – it has been carefully cut around in order to open the letter. However the more romantically inclined may argue the letter survives as it was treasured and kept safe by Miss Smith. What do you think? Did Miss Smith consider the attentions of Thomas Stone as insufferable as Elizabeth Bennett found those received from Mr Collins in Pride and Prejudice? Or was he her Mr Darcy?

Allow me to address you in these terms of endearment perhaps a little too presuming for the first time. May it not be, which I feel it too probable, the last. The want of a proper opportunity, personally to disclose to you the long concealed and painfully repressed feelings of my heart has prompted me to a boldness scarcely to be called my own, and which I hope will not prove objectionable or hurtful to your very sweet delicacy. I have for a length of time entertained for you an attachment, the warmest perhaps that ever delighted or rather tormented the heart of a man, but have never dared to reveal it to you or anyone form whom there was the least probability of your learning that I could be capable of so much presumption. The fear of being deprived of your good opinion which I once expected mine, and the pleasure of seeing you so frequently has always inclined me to secrecy however distressing and it is now with the greatest diffidence and dread of being assured that I must forever absent myself from your presence that I thus venture to risk one portion of happiness in order to acquire a greater by endeavouring to give you some idea of the sentiments of a heart I trust not wholly mean since quickened by sincerity and faithfulness.

From your very distant, though no doubt correct conduct, I have scarcely a shadow of hope that this letter will ever meet with your reception its writer so much wishes it; but I can no longer bear suspense and it appears that I could with less pain endure the knowledge of a direct refusal than still continue in doubt and indecision. I will not request you not to laugh at this apparently strange epistle, since to you that must be impossible and to me but of little consequence for should it prove acceptable your laughing could never hurt should it not we shall probably never see each other more and I trust you will at least allow me to remain ignorant that I am the subject of your ridicule for, where they eye sees not, the heart grieves not.

Probably this letter may appear rather too precise and cool for such an occasion but I assure you the known modesty of your character, the uncertainty in which I write and the fear of giving offence, are the principle reasons for my avoiding, as much as possible all ridiculous or romantic expressions, and should you have any doubt as to the truth of these lines, an appeal to one, as only one (to whom I have for the last month unbossomed everything relative, to this singular affair) will I am convinced immediately disperse them. Enough – the die is cast, and left to your decision but, in this farewell perhaps forever, allow me to subscribe myself with the greatest respect, devotedly, and even though rejected, no less truly and sincerely yours, 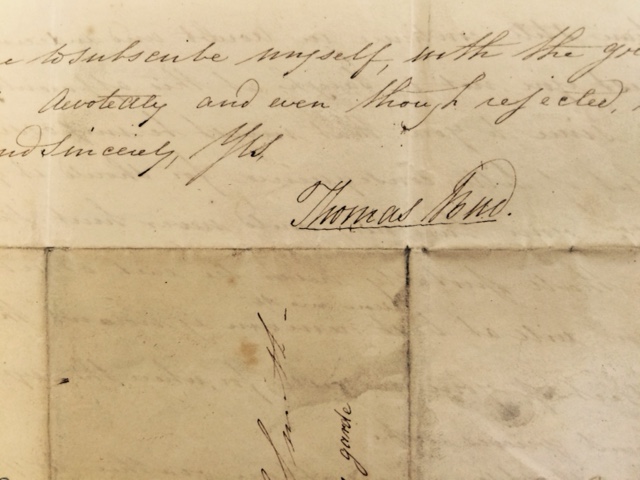 Why not try composing your very own nineteenth century love letter on the Jane Austen website. Happy Valentine’s Day!