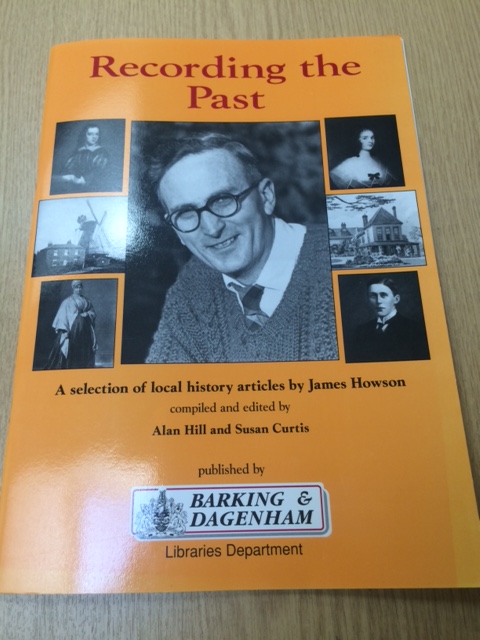 The following article was written by James Howson and published in ‘Recording the Past: A Selection of Local History Articles by James Howson’ compiled and edited by Alan Hill and Susan Curtis (1995). Copies of this publication are available to buy from the Archives and Local Studies Centre at the bargain price of £1. James Howson joined the Borough of Dagenham Library Service in 1947, and went on to become the Curator/Archivist at Valence House Museum in 1974. He retired in 1986.

Born into a society in which woman had few legal rights, were subject to every kind of abuse and exploitation, were poorly educated, and had no control over their own property or children, Mary Wollstonecraft, in her Vindication of the Rights of Women (1792), sounded a rallying call to struggle not yet concluded.

Mary was the granddaughter of a prosperous Spitalfields manufacturer, Edward Wollstonecraft. Both her parents were of Irish descent and they already had a son, named Edward after his grandfather, when Mary was born in 1759: the year of British victories against the French at Quiberon Bay, Minden and Quebec. But poor living conditions and the rootlessness resulting from a rapidly expanding London, led to moral degradation, drunkenness and crime on a large scale. This, and the death of Mary’s baby brother, Henry, may have influenced the family’s move eastwards into the rural charms of Essex, to a farm on the borders of  Epping Forest bought for them by grandfather Edward, who had already lost other sons and grandsons in infancy.

A moody and ill-tempered man, lazy and unreliable, Edward John Wollstonecraft, Mary’s father, knew nothing about farming and made little if any attempt to learn, and when Mary was about five years old he moved his family to another farm, near the Whalebone at Chadwell Heath: “a small distance from his former habitation upon Epping Forest… a little way out of the Chelmsford Road.” About this time another daughter, Elizabeth, was born.

Early in 1765, grandfather Edward died, leaving the considerable fortune of £10,000 to his son Edward John; and about Michaelmas that year, when Mary was in her seventh year, they moved again to “a convenient house behind the town of Barking … In this situation some of their nearest neighbours were, Bamber Gascoyne, esquire, successively member of parliament for several boroughs, and his brother, Mr Joseph Gascoyne. Bamber Gascoyne resided but little on this spot; but his brother was almost a constant inhabitant, and his family in habits of the most frequent intercourse with the family of Mary.”

The acquaintance of the two families may well have begun with their parents: the prosperous Spitalfields manufacturer (Mary’s grandfather), and Sir Crisp Gascoyne (1700-61), Sheriff and Lord Mayor of London. Mary’s father held the office of Overseer of the Poor for Ripple Ward in 1767/8. Joseph Gascoyne, who rented marshland given to the parish for the relief of the poor, was a member of a committee set up to review the expenses of the poor and workhouse.

But the Wollstonecraft’s pretentions to rustic gentility were short lived. While a third daughter, Everine, and a third son, James, were born at Barking, Edward John’s profligate habits and lack of ability were rapidly diminishing his fortune, and in 1768 he again uprooted his family, this time to a farm near Beverley in Yorkshire where another son, Charles, was born.

Mary was still only in her tenth year, an intelligent, affectionate and idealistic girl, exuberant and energetic on the one hand, withdrawn and even mystical on the other: “she loved to walk alone in the country and converse with God”. But she was not often alone. She has become “little mother” to her sisters and two younger brothers, all increasingly neglected by their mother, whose weak and apathetic acceptance of the degradation and violence showered upon her by a drunken and morose husband, to whom she remained a tearful slave, was witnessed and remembered by her sensitive daughter, who resolved to maintain her own independence and never to marry.

But Mary was not made for independence, as witness her life subsequently. That in her younger days she should be described as “busy and bossy” is hardly surprising: a black-stockined, “untidy-looking girl, with abundant auburn hair and little else to recommend her, surrounded by a troop of younger brothers and sisters”. But by her late twenties she could be described by a woman friend as: “very pretty and feminine in manners and person; much attached to those very observances she decries in her work, so that if any gentleman did not fly to open the door as she approached it, or take up the handkerchief she dropped, she showered on him the full weight of reproach and displeasure”.

Mary seems to have been largely self-taught, especially in her younger years, apparently made the most of any opportunity to discourse with older people of literary bent, and was an avid reader. She was stimulated by Rousseau, particularly his Social Contract. When she was fifteen, and two years before the death of her mother, Mary left home in what was never a successful attempt to escape from her demanding family. She became a companion for a few years, then in 1784, with her sister Elizabeth and her friend Fanny Blood, she opened a school at Newington Green.  Later that year, shortly before his death, she was warmly received by Doctor Johnson.

Early in 1785 Fanny Blood went off to Lisbon to marry a young businessman; to be followed in November by Mary, who found her dying in childbirth. The school was a failure and Mary became governess to a family in Ireland. In 1787 Mary’s first book: Thoughts on the Education of Daughters was published by the radical publisher, Joseph Johnson, who took her under his wing and gave her employment. Through him she met John Wilkes, Tom Paine, William Godwin, Henry Fuseli, and William Blake who illustrated some of her work and to whom she was rather condescending.

Despite her convictions, Mary was by nature no solitary walker, as witness her deep attachment to Fanny Blood, curtailed by marriage and death; her humiliating infatuation with the ageing and conceited Fuseli, whose new wife’s reaction to her pathetic proposal she might well have expected; and the ease of her cynical seduction and betrayal by the handsome and wordly wise American adventurer, Gilbert Imlay, culminating in attempts at suicide in her lonely desolation.

It was in William Godwin that Mary eventually found a person with whom she could share her life on terms of equal trust and regard. The apostle of pure reason, product of a Unitarian and Calvinistic upbringing, reserved, even cold, with a disciplined habit of mind the very antithesis of Mary’s warm vivacity and enthusiasm, had reached the age of forty, and his proposal to novelist and poet Amelia Alderson had just been refused. Amelia later married, as his second wife, the Cornish Wonder, John Opie, who was younger than Godwin and nearer her own age.

Mary’s overbearing manner and intolerance of criticism was matched by Godwin’s obstinacy, and their developing relationship was punctuated by quarrels and acrimony fostered by Mary’s abandoning, before Godwin was prepared to do so, the revolutionary ideas on marriage professed by them both. But his logic was confounded by her feminine intuition, and her heart warmed by the compassion he showed for her three-year-old daughter, Fanny, for whom no paternal support was forthcoming from Imlay.

Godwin records in his Memoirs of Mary Wollstonecraft how, in September 1796, when Mary was thirty-seven, and just a year before her death, she took him on a visit to Barking: “No person reviewed with greater sensibility, the scenes of her childhood. We found the house uninhabited, and the garden in a wild and ruinous state. She renewed her acquaintance with the market-place, the streets, and the wharf, the latter of which we found crowded with barges and full of activity”.

Mary and William were married in old St. Pancras church in 1797. Their daughter Mary was born on 30th August, but there were unforeseen complications from which the mother failed to recover, dying on the morning of 10th September and leaving a grief stricken husband and two motherless daughters. Mary’s last book: The Wrongs of Woman, remained unfinished.

First a housekeeper, then Godwin’s sister came to look after the household. Then in 1801 Godwin remarried. The “uncommonly mild and affectionate” Fanny Imlay, whose “chief attachment was to her mother”, poisoned herself in 1816 when she was twenty-two years old, putting an end, as she wrote: “to the existence of a being whose birth was unfortunate and whose life has only been a series of pain…”

The young Mary Godwin grew into a girl of fine intellect and vigorous character. She is remembered for her novel: Frankenstein, written soon after her marriage to the poet  Shelley when, with Byron, they were amusing themselves during a wet Swiss summer. Her son, Sir Percy Shelley, died childless in 1888, and through him Sir John Opie’s portrait of Mary Wollstonecraft, painted about the time of her marriage to William Godwin, reached the National Portrait Gallery.