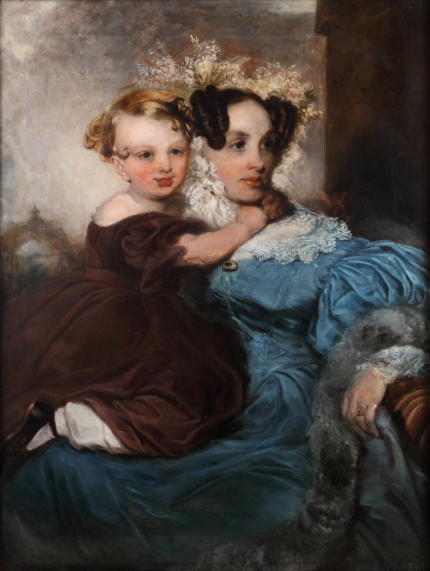 John Robert Widman – a portrait, historical, landscape and animal artist – was born in Lambeth on 22 August 1788 to John Wildman (also and artist) and Harriet Williamson.

In 1842 his wife Elizabeth died suddenly, leaving John Robert the sole parent of six children.  On 1 February 1843 the Art Union Journal printed an article under the title of ‘A case of extreme hardship’: ‘ Mr John Robert Wildman, a portrait painter of considerable talents, has been suffering from illness so sever for the last two years, as to render him utterly incapable of pursuing his profession; his means of subsistence are entirely exhausted; he has a young family entirely dependent on him for support, and has had the misfortune recently to lose his wife by sudden death. Subscriptions will be thankfully received, and specimens of his work shown, by Messrs. Welch and Gwynn, 24 James’s Street, Printsellers to the royal Family’.  John Robert Wildman died in Bath General Hospital on 21 May 1843, the cause given as ‘general debility’.

This oil painting of Mrs Mary Linsdell, nee Hunt, and her daughter Annie is possible one of the last work by Wildman. Mary Linsdell, born Barking c. 1805, was married to Thomas Linsdell (c. 1798-1878), a Cambridgeshire man. He was the licensed victualler of the Ship Inn in Heath Street, Barking in 1841, 1851 and 1861.  Their 3rd child Ann, or Annie, was born late 1841 and is shown in the portrait with her mother.

Mary Linsdell died 20th July 1860 aged 56 and was buried at St. Margaret’s Parish Church.  Her husband Thomas died 29th May 1878.  In the 1871 census he is listed as a retired publican and was living in Park Cottage, Hart Street.

The painting was presented to Eastbury Museum by the husband of Annie’s daughter in September 1942, as a memorial to his wife Jessie.