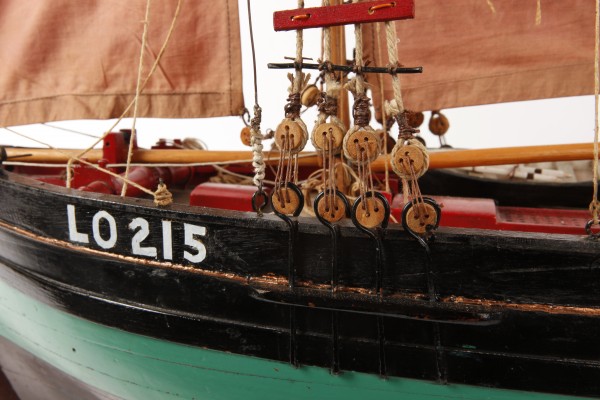 This phenomenal growth was due to one family, the Hewetts: Scrymgeour (1765–1850) and his son Samuel (1797-1871). In 1833 the Hewett fleet, called the Short Blue Fleet after its ensign, consisted of 10 vessels. The main type of fishing vessel used in Barking at that time was a well smack.

Well smacks were smacks built with an integral circulating sea-water tank in which the fish could be kept alive for some days. By 1830 there were 30-40 well smacks, or “fish pools” as they were called, working out of Barking. Most well smacks were around 50-60 feet long and carried a crew of 7 or 8.

The smack ‘Saucy Jack’ was a typical example of this type of vessel. She was built at Gravesend in 1836, and was 60ft overall and weighed 51 tons. The Saucy Jack served many years and was the last well smack to leave Barking, in 1880, although well smacks continued to be used for a very long time after that in other ports. Some vessels built later on in the nineteenth century were still fishing at Faroe in the 1950’s.

Although using the well to keep the fish was a better method than salting and wind drying, it had several drawbacks. Well smacks were not very fast due to the effect of carrying several tons of sea-water within the hull. The extra scantlings required and the manufacture of the well itself resulted in a significant increase in the cost of the vessels themselves.

Samuel Hewett realised that the long voyage which the smacks made back to the London ports was uneconomic, and introduced a system known as fleeting. Smacks fished as before but instead of wet salting, the fish were killed and packed in boxes of ice. Fast boats, called carriers or cutters, regularly collected the fish and transported it to market in London. After selling the fish, the carriers returned to the fishing grounds stopping briefly to pick up stores, water and ice. In this way the smacks could stay at sea continuously for three to six months at a time.

The new practice was extremely successful and the Hewett fleet had increased to approximately 50 in 1844. By the early 1860s almost every Barking family was involved in the industry, either as fishermen or as makers or suppliers of goods for the industry.

But Barking was losing trade to better-resourced ports such as Grimsby, which had opened its No.1 Fish Dock in 1856. The new railway system ensured that the catches could be transported quickly from the East Coast to the London market. The Great Storm of 1863 killed 60 Barking fishermen and boys, and shortly afterwards the Short Blue Fleet itself was transferred to Gorleston.