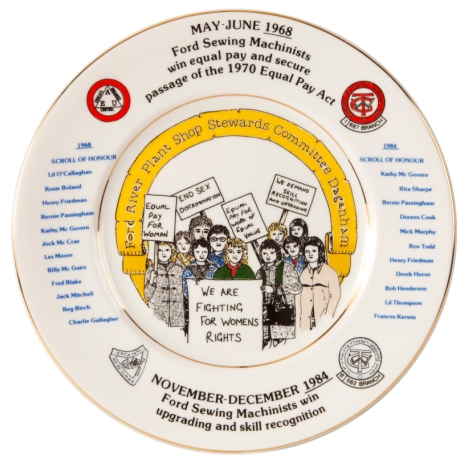 The Ford women’s strike was one of the most important since the Matchgirls’ Strike of 1888. Their struggle, commemorated by this souvenir plate, remains an inspiration to millions of women fighting discrimination and poor working conditions.

On 7 June 1968, 187 women sewing-machinists at the Ford Motor Company factory in Dagenham, East London, went on strike against sex discrimination in job grading. The women had been placed in the unskilled B grade despite doing the same level of work – making car seat-covers – as men placed in the semi-skilled C grade. The women, moreover, were paid 15% less than their male colleagues. Confronted by Ford’s refusal to upgrade them, they and 195 women from Fords Halewood plant in Merseyside, walked out and stayed out for three weeks.

The strike brought Ford’s entire car production to a standstill.

For the strike to succeed it needed support from the unions. But the official union leaders adopted contradictory and ambivalent positions, and failed to deliver any real support. However, the women stood firm, their resolve strengthening by the day.

Such was the impact of the action that in the middle of it the strike committee was invited to tea by Barbara Castle, employment secretary in Harold Wilson’s Labour government. In the end, the Ford women won 92 percent of the men’s rate, though it took another 16 years and another strike lasting seven weeks to win the regrading.

The strike gave a huge impetus to the women’s movement. In the years that followed, women’s trade union membership soared and the Equal Pay Act was introduced in 1970. The strike also gave rise to the National Joint Action Campaign for Women’s Equal Rights.