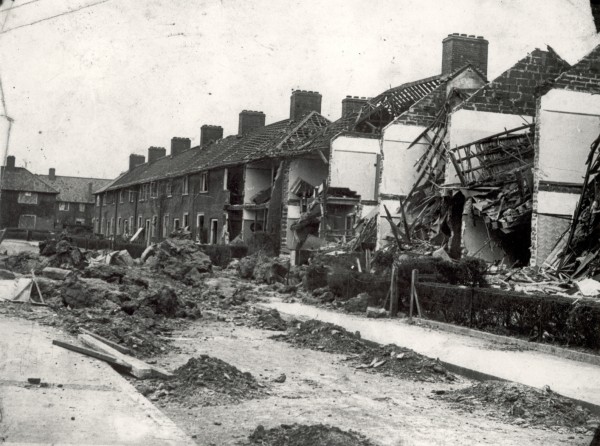 Madge Carter kept a diary throughout most of her life. Sixty-five diaries survive at the Barking and Dagenham Archives and Local Studies Centre. These diaries record her thoughts and day to day activities between 1924 and 1996. Some of her most interesting observations and insights can be found in the diaries that she wrote during the Second World War.

On the outbreak of the war she announces ‘It certainly looks as if we are in for it this time’. And in doing so really captures the trepidation that must have been felt across the county on 3 September 1939. She goes on to describe the evacuation of children, blackout and then the air-raids that followed. Madge notes: ‘Raids all night and every night now. Sleeping in the drawing room’ on 9 September 1940.

There are also lots of references to the need for women to ‘make do and mend’. Madge writes: ‘Knitted and mended all day’ on 4 June 1943 and then ‘Knitted furiously all day’ on 20 January 1944. Thus confirming that for many women knitting became an obsession during the Second World War.

Madge was obviously a busy woman, with lots of diverse interests and friends, who enjoyed an unprecedented amount of freedom during the Second World War.

This item is available to view by appointment at the Barking and Dagenham Archives and Local Studies Centre (Archive reference: BD87).