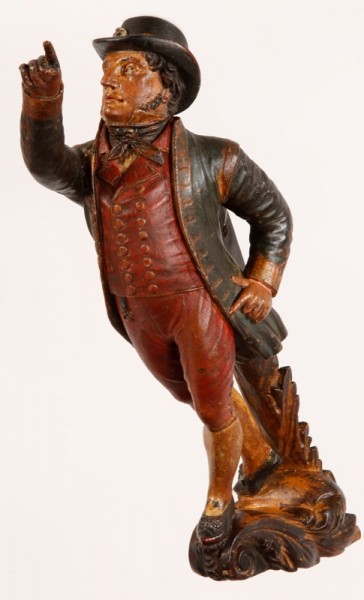 Taken from one of the last Fairlop Frigates (small scale ships on wheels) used in the Fairlop Fair parade, this mast head is believed to represent the founder of the fair, Daniel Day.

For over 150 years, the Fairlop fair was one of the great local events.  Daniel Day (1683 – 1767) was wealthy landowner and in the 1720s began a tradition on travelling to Fairlop on the first Friday of every year to collect his rents. He also owned a ship’s pump and blockmaker’s business in Wapping, and was so popular that he was given the nickname ‘Good Day’.  During his visits to Fairlop, Daniel would arrange for a feast of bacon and beans to be served for his tenants and friends, which was enjoyed under a large oak tree – the famous Fairlop Oak.

Within a few years, the annual gathering grew in popularity and size, and quickly took on the appearance of a Fair, with sales of gingerbread men, toys, ribbons, together with puppets, circus acrobats, wild beasts and other entertainments.

A small wheeled boat became the symbol of the gathering – ‘[Daniel Day’s] business being that’s of a ship’s pump and block maker, he had a boat constructed to run on wheels and this strange craft with mast and rigging all complete, used to journey from Wapping by way of Mile end, Bow, Stratford and Ilford to Hainault,..’ – and more boats on wheels soon joined the procession. Crowds would line the route to get a view of Daniel Day had his famous frigates, giving the whole thing the appearance of a carnival.

‘In the evening, crowds lined the roads of East London and the suburbs, waiting to see the return of the Fairlop Boat. Eventually it arrived heralded by the strains of a brass band…’

It was estimated that there were at least 200,000 people in the forest or attending the fair. At the height of its popularity the fair was regarded as the greatest drinking bout for East Londoners. The Religious Tract Society at one of the Fairs counted 72 gaming tables 108 drinking booths and distributed 45,000 tracts.

‘..the gathering beneath the Fairlop Oak soon attracted the proprietors of roundabouts, swings-boats, and shows, until it assumed the proportions of a regular fair. There were boxing booths where you were not only able to witness bouts of between professional pugilists, but were also cordially invited to don the gloves and prove your dexterity in the ‘noble art of self defence’. There was generally a show of an excessively fat lady, a real live mermaid’ was sometimes exhibited and such oddities as the boy with white hair and pink eyes , and the living skeleton, were as sure of obtaining patrons as was the man who could break a stone with a blow of his fist…The coconut shies were of the good old fashioned sort …Skittles were highly popular… A gentleman in tights would invite some accommodating spectator to truss him, with ropes and then, when the only organ left unfettered was his tongue, he would harangue the crowd and invite them to throw their coppers into his hat…The professional fire-eater was usually in evidence, as was the man who, for a stipulated contribution, would eat broken bottles with apparent relish…As dusk approached the fun waxed fast and furious. The blare of unmusical instruments, the shouts of hilarious youths, and the shrieks of timid maids caused a perfect pandemonium of sound. Lads with squirts discharged streams of not over clean water into each other’s faces; some, armed with ‘ticklers,’ strolled up and down in search of mischief and horseplay increased as it grew dark. Strolling singers bawled broadside ballads of questionable taste, dancing was indulged in without restraint, and a gay rollicking riotous scene brought the day to a close’

However, its popularity became its downfall and soon fell out of favour with the local authorities.

In 1851 Parliament agreed the deforestation of the Fairlop plain, turning it into arable land. Although the Fairlop Fair continued for another 50 years in differing guises things were never the same again. The last Fair of any size was in 1900.

The huge Fairlop Oak (whose shadow covered nearly an acre), which was the pivot of the gathering, could well have been up to 700 years old. It was destroyed by lightening, fire and vandalism, and its roots were dug up as part of the Fairlop deforestation. In the end its wood was put to good use in such things as coffins, pulpits and mementos.