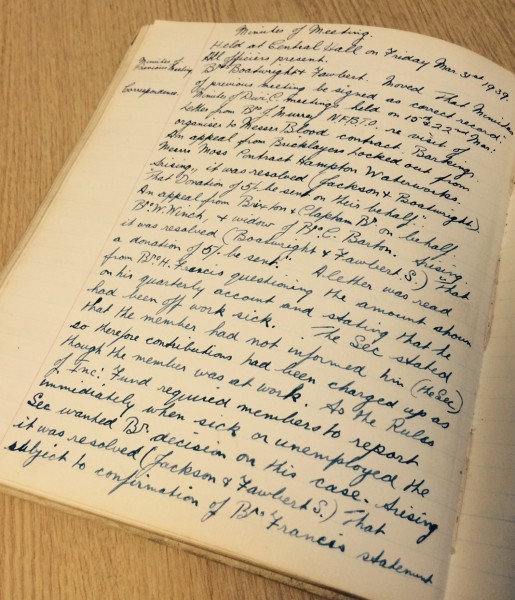 The minute books of the Dagenham Branch of the Amalgamated Union of Building Trade Workers are a goldmine for researchers wanting to delve into the history of local trade unions, focusing on working conditions and problems facing workers in the local areas of Dagenham, Barking, East Ham, Beckton and Rainham. This material also provides a rare and unprecedented insight in to the perceptions of working class people towards national politics and international affairs during the run up to the Second World War.

The following extract shows the reaction of the Dagenham Branch of the Amalgamated Union of Building Trade Workers to the Munich Agreement, a settlement permitting Nazi Germany to annex portions of Czechoslovakia, signed by Adolf Hitler, Neville Chamberlain, Benito Mussolini and Édouard Daladier on 30 September 1938.

‘We call for the immediate coming together of peace-loving progressive parties with or without labels to form an active popular front against the National Government. This popular front is to unite anti-fascist opinion, as first advocated by the Communist Party of Great Britain’.

Perhaps unsurprisingly on the outbreak of hostilities in 1939, the Dagenham Branch become even more scathing towards the government and what they called the ‘imperialist war’ against Germany. The members raise concerns that the burdens of war are ‘maiming workers pay’, and that the war is actually furthering the cause of Fascism.

The Dagenham Branch are equally outspoken throughout in regards to their support for the Soviet Union. The minute books contain comments on the ‘current flood’ of anti-Soviet propaganda appearing in the press and on the radio across Britain, and in turn argue that ‘the real aim and intentions of the current government is to break down working class support for the Soviet Union’.

This item is available to view by appointment at the Barking and Dagenham Archives and Local Studies Centre (Archive reference: BD55).