EVERYDAY FUTURES is an HLF funded project celebrating the work of borough photographer, Egbert Smart & the local area, connecting his archive to the contemporary landscape of Barking & Dagenham. The project is run in partnership between Barking and Dagenham Archives and Local Studies and artist Verity-Jane Keefe, who has produced six new audio guides, maps & walks that cover all corners of the borough, as both alternative local tour guides & artworks, making visible the everyday brilliance of Barking & Dagenham.  The research and the audio guides and walks are based around six key character areas chosen for their individual characteristics – Chadwell Heath & Marks Gate; Becontree; Dagenham Village and beyond; Dagenham East to Rush Green; South of the A13, Riverside, Thames View; and Barking and beyond.

Egbert Smart, 1907 – 1999 worked at Dagenham Public Libraries as a Branch Librarian at Wantz, Rectory, and Valence Libraries. He helped establish Dagenham Libraries as pioneering cultural and community hubs. As a talented photographer and film-maker he was a key player in the Dagenham Co-operative Film Society, later the Fanshawe Film Society, where he held the position of general secretary. He was also, perhaps most importantly, the Borough Photographer from 1951. Documenting the everyday, events, streets, people and place, the photographs he took offer a vivid portrait of Barking and Dagenham over the last fifty plus years.

All 16,500 of Egbert’s photographs have now been digitised and are available for the public to view.  Below is a selection based on the six character areas – for more information about the project and the research that has been carried out visit the project’s web page Our Everyday Futures.

Chadwell Heath is an established, autonomous place, and quite distinct from Dagenham – a fact proudly upheld by many of its residents.  In the context of this project it is also significant for being the home of Egbert Smart who lived at Tolworth Gardens and so is particularly well documented in the collection.

Here we see the approach to Chadwell Heath Railway Station in May 1955 looking much calmer than it does today; a large block of flats on Eastern Avenue in 1955, with the A12 in the foreground; and children playing on a new roundabout in St Chad’s Park in 1958. 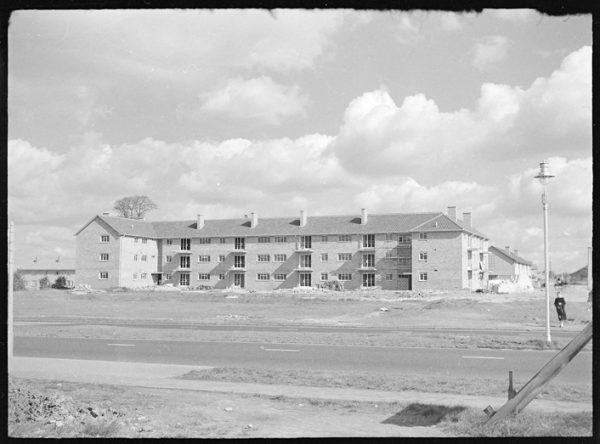 From old to new (left to right), Rose Lane Farm in 1954, the unfinished flats opposite the farm in 1954, and the completed war memorial bungalows for the elderly in 1955.  The estate was officially opened with the unveiling of a plaque by Mayor Leonard Todd in 1960. The first record of Dagenham can be found in a charter of Barking Abbey from 687 when it was just a small farmstead.  Over 1300 years later Dagenham Village still stands but in a drastically different environment.  Egbert Smart captured the character of the area in its relatively recent history before it underwent major redevelopment and many of its older buildings were demolished to make way for the new.

Take a walk down Crown Street as it was in 1960, from east to west (left to right) old cottages and shops with two ladies standing outside, row of shops including the Co-operative Society and Palace Radio, and a row of cottages. All of these buildings were demolished shortly afterwards and this section of the road itself was removed as Crown Street was blocked off to make way for the flats that stand there today. In the aftermath of World War One the London County Council embarked on one of the most ambitious house building projects ever known. The first houses on the Becontree Estate were constructed in 1921 and the completion of the estate was celebrated in 1935 with the official opening of Parsloes Park.  As the largest estate in Europe the sheer size of Becontree can be quite daunting and it is quite easy for one street to look the same as another.  However, look a little closer and the individual characteristics of Becontree become clearer.

Some of the distinctive features that Becontree was known for include the prizewinning gardens, the individual parades of shops, and the well-used and vibrant parks. Here we see the winning garden from 1952, the Heathway looking north in 1954, and the diving team at the swimming pool in Valence Park in 1955. Covering the area east of the Heathway this part of the borough had great civic importance as home to the Civic Centre – headquarters of the the borough council – and Central Park which played host to Dagenham’s famous town shows over the years.  This interesting area also includes Wantz Library, one of Smart’s former workplaces, country parks, elements of industry, Dagenham and Redbridge FC, and the Heath Park Estate. The Heath Park Estate was built in 1951 and incorporated a mix of flats and cottages interspersed with open spaces.  The estate’s architects won a festival of Britain award for their work.

Below we can see coronation celebrations at Central Park in 1953, the printing of council minutes at the Civic Centre in 1957, the Dagenham Girl Pipers walking from Romford Station to Central Park as part of the Chipperfield’s Circus Parade in 1955, Kershaw Road on the newly built Heath Park Estate in 1951, the new Rush Green Technical College in 1961, and finally houses on Trefgarne Road in 1953. SOUTH OF THE A13, RIVERSIDE, THAMES VIEW

A dynamic area rich in history as well as being the current focus of the borough’s future.  Ongoing redevelopment will see drastic changes in the area but up to now it has been known for its industrial heritage.  The area takes in Creekmouth, Barking Power Station, Dagenham Breach, and industries such as Lawes Chemical Company, Samuel Williams, Ford, many more smaller businesses and of course the old fishing fleet. The Thames View estate, officially opened in 1954, brought the first large residential development to the area to the north of Creekmouth village.

Egbert’s photographs capture the area nicely and below we see a car transporter waiting at the level crossing at Dagenham Dock in 1959, quayside workers at Samuel Williams in 1954, the Samuel Williams jetty at Dagenham Dock with Barking Power Station visible in the background, the now closed Crooked Billet pub at Creekmouth in 1976, the Thames near Frog Island looking upstream towards the Ford Motor Works in 1959, and a pathway off Bastable Avenue on the Thames View Estate in 1968. Neighbouring town to Dagenham and home to a range of distinctive sites including the Gascoigne Estate, the town quay, the abbey grounds, and Eastbury Manor.  As the official photographer for the Borough of Dagenham Egbert Smart’s work rarely focused heavily on Barking, at least not until 1965 when the two unified to form one borough. However, there are still plenty of references within his collection to this vibrant area.

The Gascoigne Estate built in the 1960s made a major change to the landscape of Barking at the time and has been distinctive part of the area for the past 50 years but recent and ongoing redevelopment have seen it change yet again.  From left to right old houses in the Gascoigne area awaiting demolition in 1966, new housing in the area in 1966, and the living room of one of the new Gascoigne flats in 1965. A small section of other sites in the Barking area below: the Willishawes/Willis Hawes Farm on Ripple Road on the boundary between Barking and Dagenham in 1952, Upney Lane near the junction with Westrow Drive in 1953, and finally another of the borough’s lost pubs, the Fishing Smack on Abbey Road in 1976. 2 thoughts on “Our Everyday Futures”