Letter dated 31 May 1989 to Mr Victor Wakeling from Lloyd Forbes, News Editor of WRVS News. Mr Forbes writes to ask Mr Wakeling if he will be willing to do an interview for the magazine regarding his works for Northern Ireland and Brunei. .For 12 years Mr Wakeling spent all his free time collecting books, games and puzzles to be sent to British troops in Brunei and Northern Ireland. He began in 1976 after his brother-in-law returned from a tour of duty with the Air Force and complained how short of books, playing cards, games etc, troops were while serving abroad.

Typescript letter on a single sheet of cream A4 paper. The paper is headed with the Woman's Royal Voluntary Service logo. Signed in blue pen, with a handwritten Post Script at the bottom.

Inscription Typed On front: Women’s Royal Voluntary Service WRVS NEWS 110 Walter Road SWANSEA SA1 5QQ (0792) 643946 LLOYD FORBES News Editor Mr. Wakeling, 25 Bradfield Drive, BARKING, Essex. 31 May 1989 Dear Mr. Wakeling, I first heard about your tremendous achievements collecting thousands of books and puzzles over the years to send to the troops in Northern Ireland from Alison Roden and I have now had a letter from Major Helen McMahon of the WRAC, BOAR together with a black and white film which I am having developed. We would like to tell your story in the Summer issue of WRVS News and I would be glad if you could let me have some more background. I would be interested to hear what first motivated you to undertake this mammoth task and what experience or connections you have with the Forces; how & where you collected the books and puzzles; did you select books or send whatever came your way; was there any ‘feedback’ from the troops about what they preferred; indeed, any ‘angles’ or anecdotes that come to mind. (I will recall when I was serving in a Destroyer in the heat of the Far East during the war receiving a Red Cross parcel containing warm clothing, including a balaclava Helmet!). Please drop me a line and tell me what you can in you own words, and I will look forward to hearing from you. Yours sincerely, Lloyd Forbes PS. What’s you Christian name? 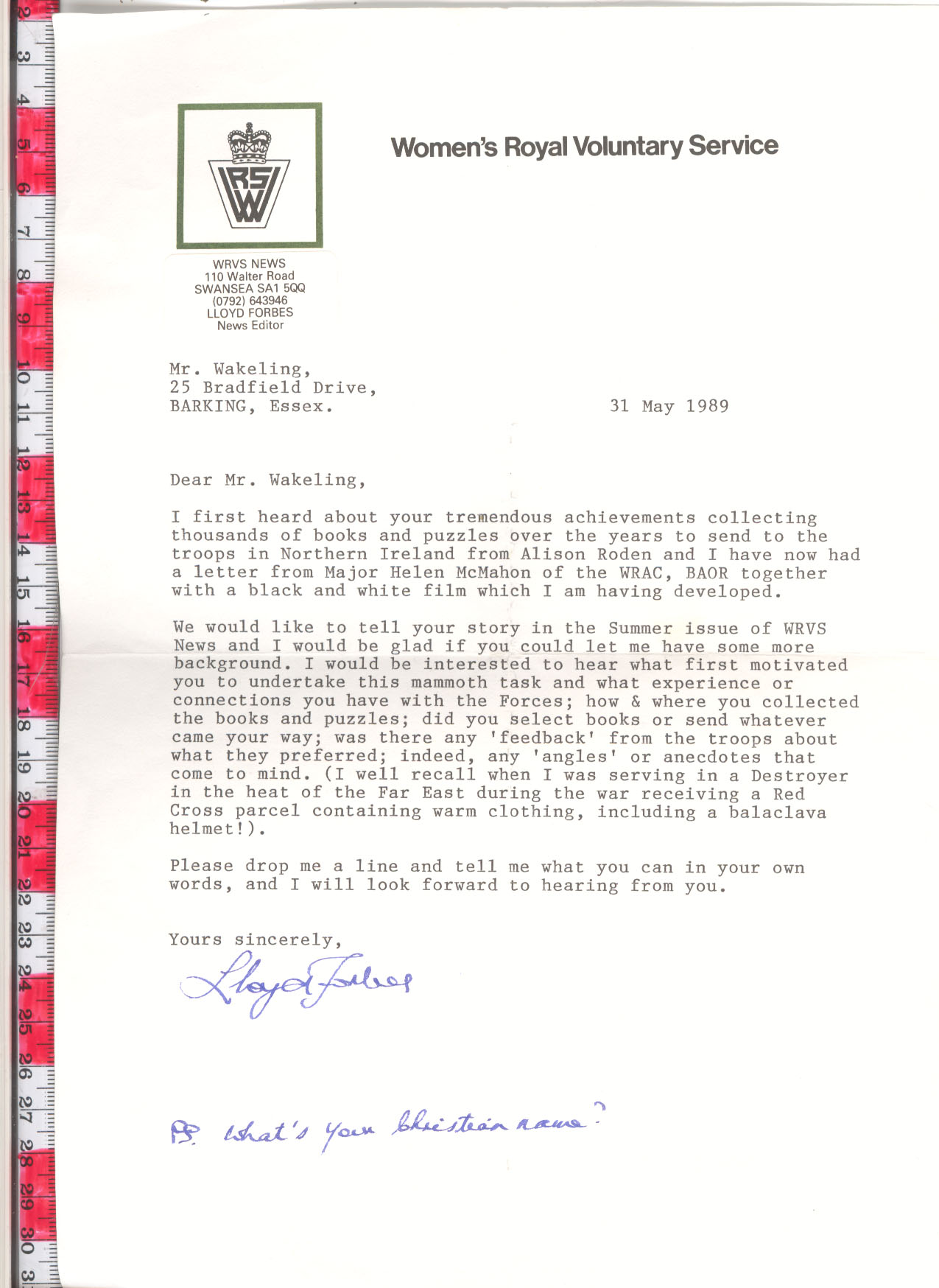