Letter dated 12 June 1985 to Mr Victor Wakeling from Captain C H Turner, QC Signals, Traingin Team Brunei. Captain Turner writes to thank Mr Wakeling for all of his work. For 12 years Mr Wakeling spent all his free time collecting books, games and puzzles to be sent to British troops in Brunei and Northern Ireland. He began in 1976 after his brother-in-law returned from a tour of duty with the Air Force and complained how short of books, playing cards, games etc, troops were while serving abroad.

Typescript letter on a single sheet ofcream A4 paper. The letter is typed on a photocopy of the TTB headed paper. The salutation and signing-off are handwritten in black ink.

Inscription Typed On front: From: Captain C H Turner QC SIGNALS Training Team Brunei Medicina Lines Seria BRUNEI British Forces Post Office 11 DO: TTB 4/1 Mr V A Wakeling 25 Bradfield Drive Barking Essex IG 119AW ENGLAND 12 June 1985 Dear Mr Wakeling, Thank you very much for your letter. Capt Young has been posted from Brunei and I am now the present Adjutant. We have not received any books lately, however we badly need a resupply. Surface Mail to Brunei usually takes about 3 months, so the books should arrive just in time for our next major course. I do not know if you know what our role is in Brunei, but we are the British Army’s Jungle Warfare School. We train soldiers from all units of the Army and from all theatres. They spend about six weeks with us, the majority of that time spent is in the jungle. The books you send us are much used as darkness falls by about 7 o’clock in the jungle and that makes for very long nights. Movement is not possible and so reading by candle light in your hammock is the only way to pass the time! Although we do not take WRAC on our courses there are some sixty British wives in Brunei and I am sure that they would very much appreciate some books etc to read too. I would like to say thank you on behalf of the Training Team and all our students for all your hard wok in supplying us with books and puzzles. I will let you know as soon as your latest consignment arrives. Yours sincerely [signature] 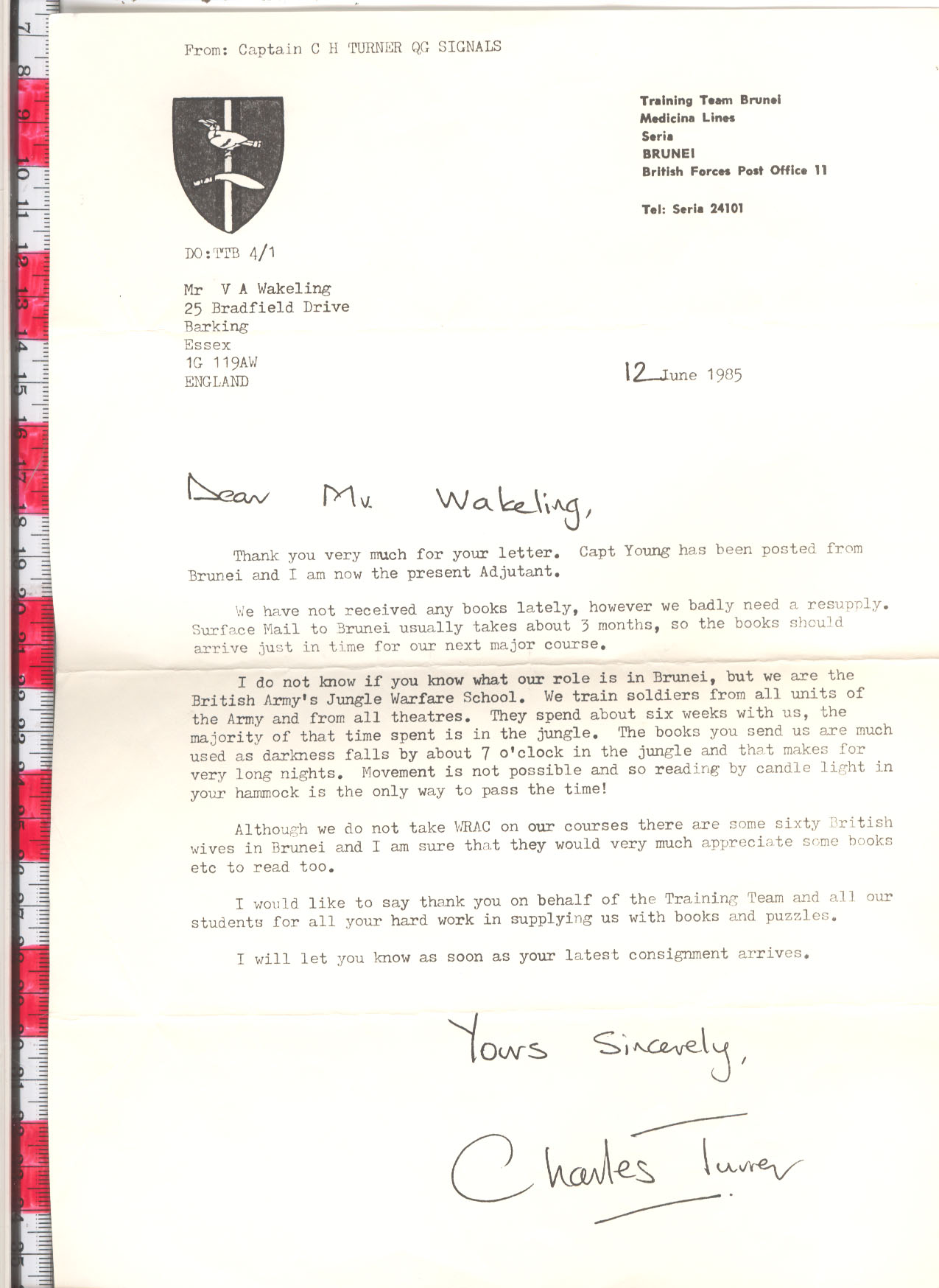