Originally thought to be Henry Fanshawe (1600-1629), second son of Sir Henry Fanshawe, 3rd Remembrancer. Now known to be Sir Simon Fanshawe, Baptized 23rd April 1604. Sir Simon Fanshawe was the 4th son of Sir Henry Fanshawe and his wife Elizabeth Smythe. He was brother of Thomas, 1st Viscount Fanshawe (see LDVAL 16 & LDVAL 41), Sir Richard Fanshawe (see LDVAL 26) and Alice (see LDVAL 529). In 1623 he was admitted to Lincolns Inn and appears to have been a clerk in the Remembrancers office under his brother Richard. He was knighted 11th February 1640 and was taken prisoner during the English Civil War, but was later fined and allowed to go to France. He married Katherine Ferrars, widow of Knighton Ferrars, whose daughter Katherine (see LDVAL 2004.5.1) later married Sir Simon's nephew Thomas, 2nd Viscount Fanshawe (see LDVAL 16). He and his wife had one son, Thomas, who was baptized at Ware on 7th July 1641, but who died young. He was described by Ann Fanshawe, in her memoirs, as ?a gallant gentleman, but more of a libertine than any one of his family?. See also LDVAL 20. Previously attributed to Piper.

Three-quarter length portrait showing a gentleman turned to his right and dressed as a Cavalier. He is wearing a buff doublet with a laced-up front, pointed waist and short skirt. He has mustard coloured sleeves with gilt decoration. He has a white lace edged linen falling band at his throat, below which can be seen the beaded band strings. At his wrist he has lace cuffs turned back over the sleeves. There is a mustard shoulder belt with gilt frayed edges over his right shoulder and across his body. He is wearing plain brown breeches. His left hand is held to his chest, and has a gold band on is little finger. His right hand is resting on a table at his side, upon which also rests a shotgun. He has brown shoulder length hair and a moustache and small beard tuft under his lower lip. Over his right shoulder, through a window can be seen Naseby Field. Set on a plain brown background.

Cavaliers were gentlemen supporters of the Royalist cause during the English Civil Wars (1642–1651). Their style of dress which included long hair in ringlets and a liking for elaborate embellished clothes, was in complete contrast to the Roundhead supporters of Parliament, with their preference for short hair and plain dress. The best remembered cavaliers were men who served in the cavalry under Prince Rupert an archetypical cavalier. (http://en.wikipedia.org/wiki/Cavaliers) 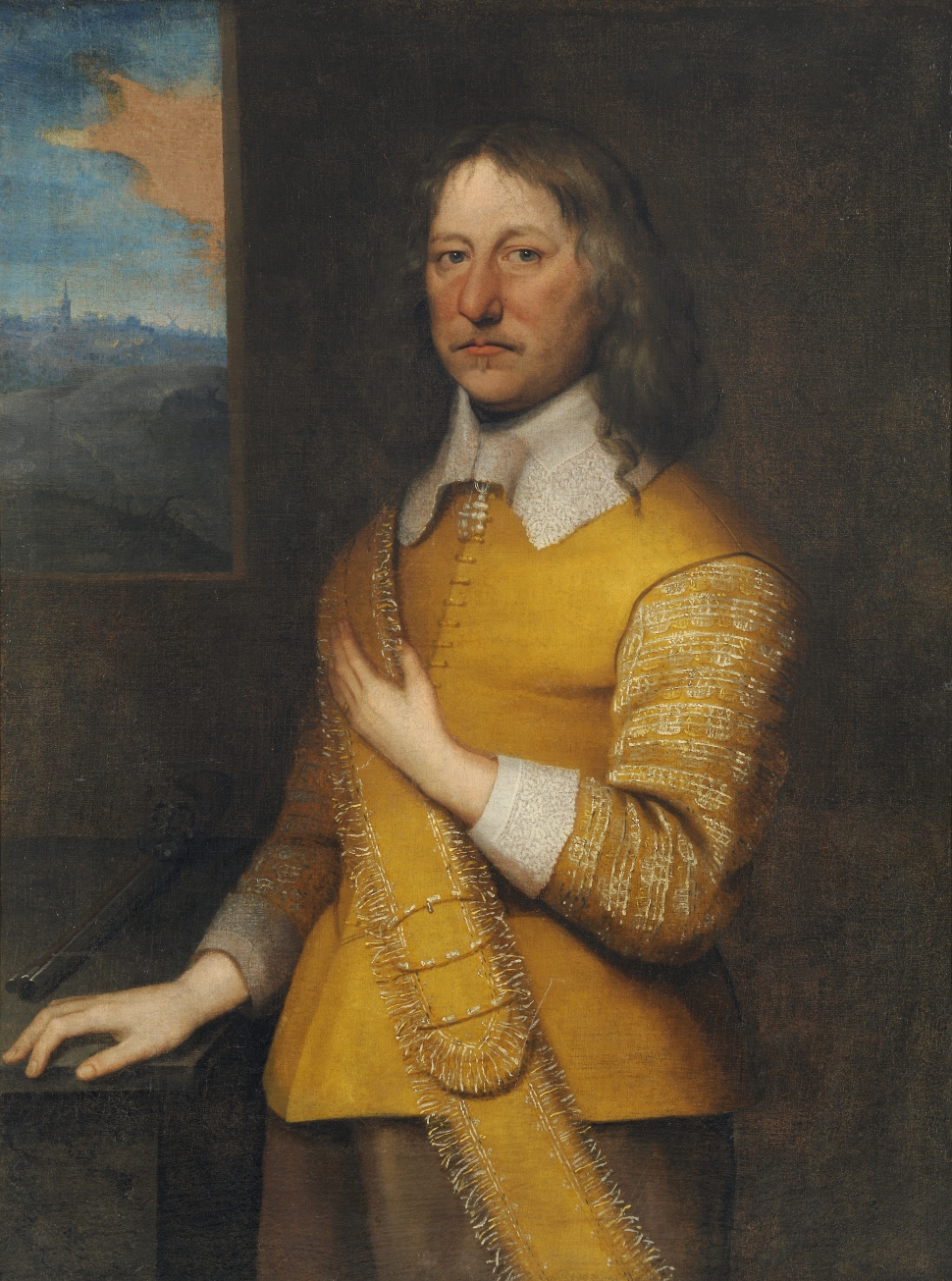