Souvenir of visit to Ford works, Dagenham, England, during the Coronation of Their Majesties King Geoge VI and Queen Queen Elizabeth. May 1937

Printed booklet celebrating the visit of King George VI and Queen Elizabeth to Fords works, Dagenham in May 1937. Gives an overview of the works undertaken at Fords under the sub-titles: Ford works Dagenham; Ford as manufacturer; Ford buys from other industries; Ford in pig iron production; Ford in by-product production; Ford in education; Ford in argriculture; Ford products in other industries; Ford products on the sea and in the air; Ford accuracy - a world standard; Ford in estate development; Ford car ownership; and The new Ford V-8 "22". Visit and souvenir booklet to mark the coronation. Contains black and white pictures throughout.

Paper booklet in cream card covers. Printed throughout in black ink with full page and smaller black and white photographs.

Ford opened its first factory in England in Manchester in 1911. It has been associated with Dagenham since 1924. At this date, it bought a portion of land from Samuel Williams & Sons Ltd who managed an estate at Dagenham Dock for industrial activities. The main Dagenham production works were closed in 2002 but a remodelled diesel engine plant remains on the site. Initially, the Dagenham site operated as a trading estate with Briggs Motor Bodies and Kelsey-Hayes Wheel Company also there. These two companies were eventually subsumed into Ford Motor Co itself during the 1950s. Ford’s Dagenham retained its own archives. According to Mr Tom Malcolm, Manager of Ford’s Heritage Programme, the UK records were shipped to Ford’s US Archive Department which, in turn, transferred its material to the independent H. Dearborn Archive. However some material from was deposited at the National Motor Museum. (master info sheets)

Inscription Printed On book plate: The Coronation of Their Majesties King George VI and Queen Elizabeth WELCOME... to our Coronation Visitors On this happy occasion in our nation's history, we take special pleasure in welcoming you to Dagenham, the centre of one of Britain's great industries. It is twenty-six years since the last British Coronation, and it is interesting to recall that it was in that same year, 1911, that the first Ford factory was established in Great Britain. The factory employees numbered less that one hundred. Today, you will see an industrial city employing over 12,00 work- people devoted solely to the manufacture of Ford products, which are exported from Dagenham to all parts of the world. The progress made during the past quarter-of-a-century is worthy of record, we feel, not in any spirit of boastfulness, but because it points to the usefulness of the Ford view of business. Your visit to Ford Works may, perhaps, prove of still greater interest to you if you view it, not alone as a large and efficient industrial undertaking, but as an effort to put these ideas into practice. FORD MOTOR COMPANY LIMITED.

One thought on “Souvenir of visit to Ford works, Dagenham, England, during the Coronation of Their Majesties King Geoge VI and Queen Queen Elizabeth. May 1937” 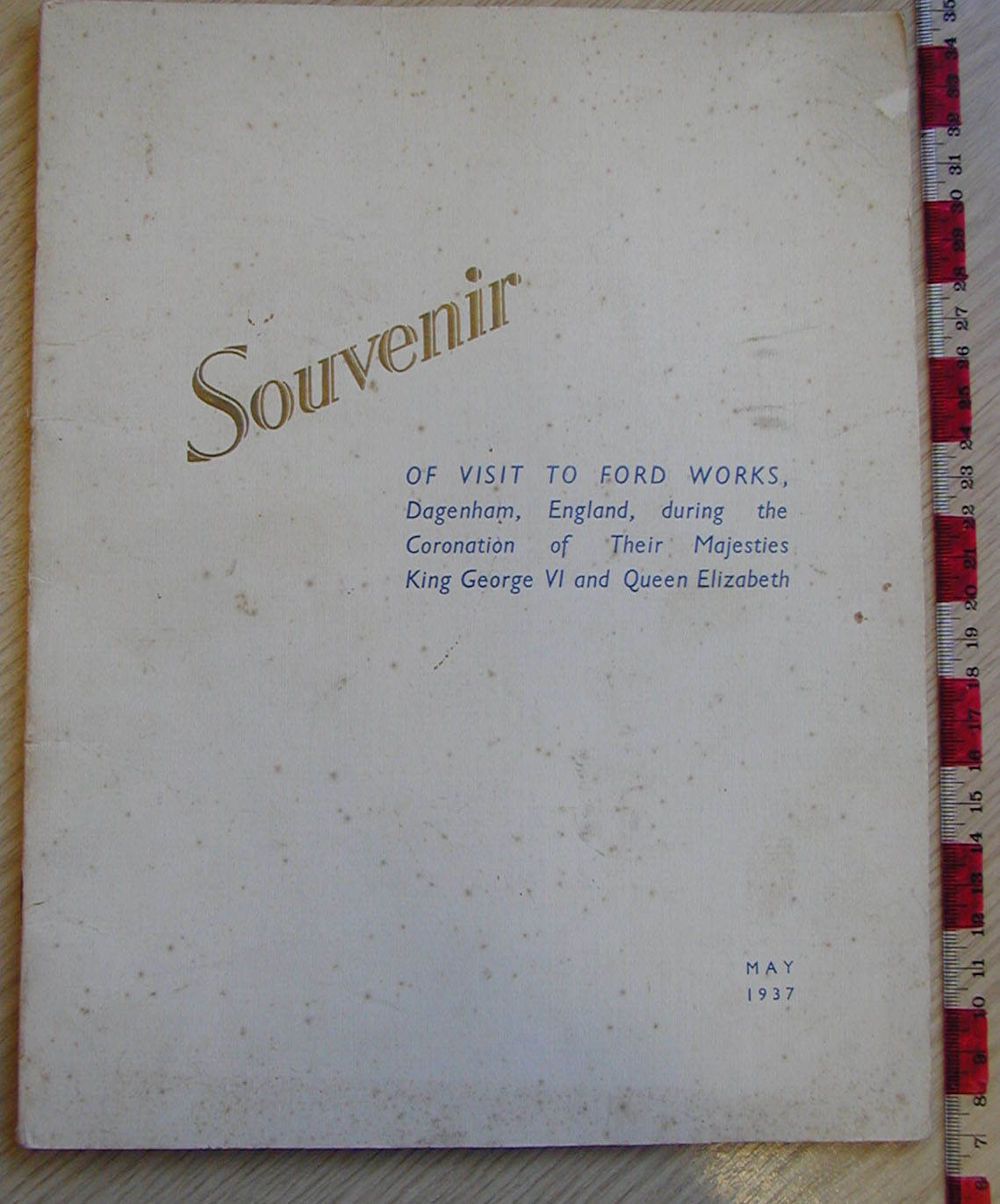