Black and white photograph of an oil painting of Thomas Fanshawe that has been heavyly painted over with black and white watercolour paints. This is a mirror image of the portrait held in Valence House Museum's collections (See no.24). Donated as part of a larger Fanshawe donation to the archives department. Mounted in cream card. Thomas, son of Sir Thomas, K.B. (see nos.16&41) and his wife Elizabeth Cokayne. He was imprisioned in 1659 for his services to the Royalist cause, released in 1660, made a Knight of the Bath at the Coronation of Charles II and elected MP for Hertford in 1661. His first wife, Katherine (see LDVAL 2004.5.1), whom he married in 1648 when they were aged 14 and 16, was the daughter of Knighton Ferrars, whose widow had married Sir Simon Fanshawe (see no.33). Katherine died in June 1660, possibly due to the birth of a child, as the register of Ayott St. Lawrence (near Ware) records the burial, on 22 November 1660, of ?Mrs Marie Fanshawe daughter of Sir Thomas Fanshawe?. Thomas remarried in 1665, to Sarah (see nos.13/1&2), widow of John Wray and daugter of Sir John Evelyn. They had four children together: Sarah (d. young 1668); Anna Maria (d. young 1668); Evelyn (1669-1687); Katherine (d.1684). Their son Evelyn, the 3rd Viscount, died unmarried in 1687. Neither of Thomas's younger brothers, Charles and Simon, who succeeded as 4th and 5th Viscounts, ever married and the Viscountcy was extinguished when Simon died in 1716.

Black and white image showing a middle aged man turned to his left. He wears a suit of armor with a white tasseled scarf tied around his neck. His brown hair hangs loose in curls past his shoulders, possibly a cavalier wig. Set on a plain dark background, set within a feigned oval frame. The image has been heavily painted over with black and white paints. It has slipped in its mound, and a section of untouched photograph can been seen at the top showing the easel that held the unframed oil painting in place for the photograph. 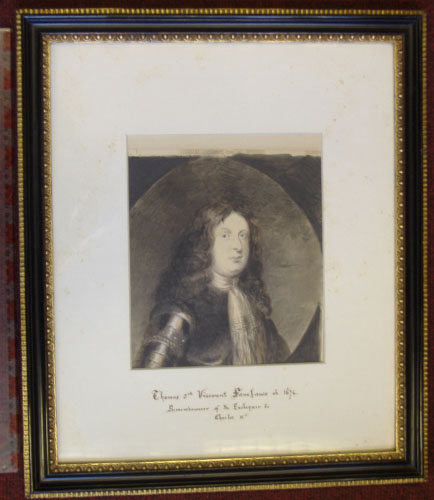