Large iron bell and detached bell clapper from the bell turret of Whalebone House. Salvaged from the remains of the house when it was destroyed by an enemy bomb in 1941. Bears the date 1783 (mis-quoted on plaque as 1785). Mounted on a specially made plinth with a dedication plaque on the front. Situated on land that is now between Gordon Road and Albany Road on Chadwell Heath High Road, Whalebone House was built during the Tudor period, and its existence is first recorded in 1662. The house (as well as the nearby Whalebone Road and former Whalebone Library) takes its name from the two huge whale bones which stood either side of its front gate. These bones come from a whale washed up at Dagenham Breach during a storm on 3rd September 1685.

Whalebone House was an imposing three-storied building with a bell turret. It contained some finely panelled rooms, an oak staircase, a fine kitchen with large firegrate and oven of curious pattern, and a long, massive oak bench. Several of the rooms have two doors to them (one has three), which are fitted with iron bars and staples. At the top of the house are two attics, one with a large firegrate, as though it had been intended to serve as a kitchen or living room, the other with strong iron loops on the beams supporting the roof, from which hammocks were swung.

The whale bones were moved to Valence House Museum, where they were proudly displayed around the front door for a number of years. However, they have since been removed due to damage caused by acid rain. The last owner of Whalebone house was Mrs Lester. The donation of these items complete the bequest of Helen and Albert Lister, which included the whale bones.

Large iron bell with iron fittings, attached to a thick wooden beam. The bell has a banded decoration and the front is marked with the date. Mounted on a specially made wooden plinth, covered in dark wood veneer.

Inscription Engraved On plaque on front: BELL, DATED 1785, FROM THE ROOF TURRET OF WHALEBONE HOUSE (DEMOLISHED BY A GERMAN PARACHUTE MINE IN THE SECOND WORLS WAR). GIVEN TO VALENCE HOUSE MUSEUM BY ALBERT & HELEN LESTER AND FAMILY. LAST OWNERS OF WHALEBONE HOUSE, TOGETHER WITH ITS TWO WHALEBONES AND THE REMAINS OF A RIFLE BARREL FOUND IN THE 1930’S BURIED IN AN INTERNAL WALL. 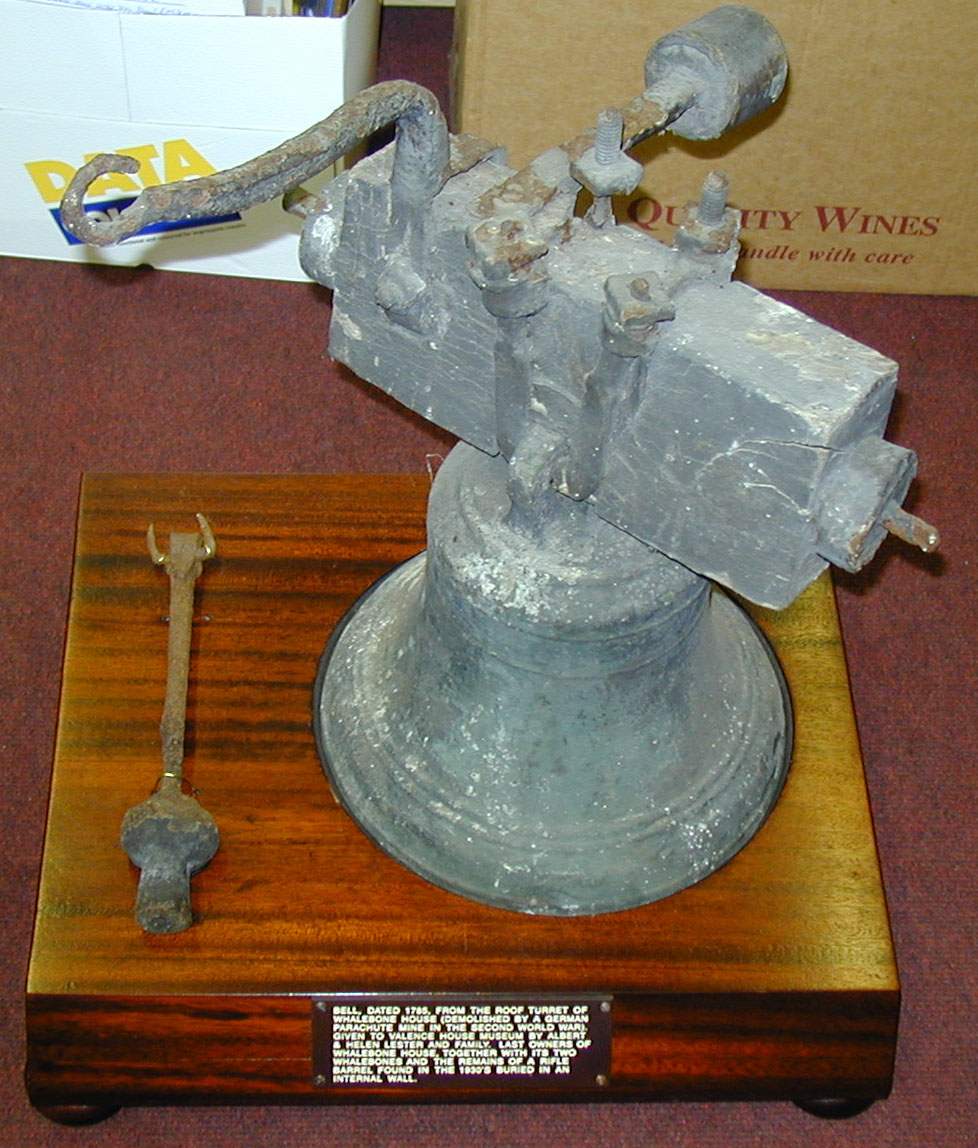